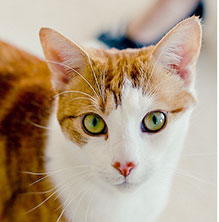 It was a matter of life and death when a vet clinic phoned me about Azlan’s situation. His guardians had decided to put him to death because they couldn’t afford the cost of the surgery he needed for a long-neglected abscess at the base of his tail. I asked if they would keep him if enough money was raised for his surgery, but they were afraid that the same neighbourhood cat would repeatedly attack him.

A kind supporter came forward with financial help, so the rotting flesh beneath the scab was removed, the deep wound was closed and temporary drains were put in place. Azlan then went into foster care for rehabilitation.

Now that Azlan has fully recovered, he is looking for a home where his quirky personality will be accepted by his new caregiver(s). Although he purrs and sometimes enjoys being stroked, Azlan seldom seeks out affection.

He may jump onto a human bed in the night, purr happily for a few moments and then leave just as suddenly as he appeared. He can enjoy short bursts of loving touch when he smooches and head bunts - but then unexpectedly turns to scratch his admirer. For this reason Azlan would not currently suit a home with children or elderly people. He needs to be the only cat in the home…although he doesn’t seem to mind cat-friendly dogs. Due to his strong hunting instincts he could not share a home with pet birds or rodents.

Azlan has just turned three years old and is a strikingly handsome, energetic, green-eyed ginger and white boy. He is an independent fellow who likes to play with strings and doze for hours in a comfortable chair or on the floor right in the middle of a room. Sometimes he builds up into a frenzy of energy where he chases his tail and rushes about the house. His appetite is excellent, he is expert at using a litter tray and is incredibly curious. If a drawer, the fridge or a cupboard door is opened, he will jump right in to explore.

Due to his eccentric personality, I am seeking a very special home for Azlan where he will be allowed to be his own person and where his unpredictable nature will be graciously accepted. If you are able to offer him a fairly quiet and routine lifestyle in a traffic-safe area, I look forward to your response. Most people seek instant gratification when adopting a cat, so his applicant(s) will be as unique as he is. I am hoping Azlan may become less erratic once he is settled into a patient, forgiving, forever home….

Azlan has recently been vet checked, is neutered, micro-chipped, flea and worm treated.

My sincere thanks to Claire for contributing to Azlan’ s vet bill, to Beryl for so lovingly fostering him and to Steph from Available Light  for taking professional photographs of him.