When we took Spike to the cul-de-sac home of his new caregivers, he had a quick look around the lounge before going into hiding behind their TV set. Two days later Kathy asked to return him because she thought he may never settle in his new environment. 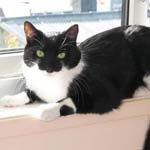 Knowing how lovely Spike is when he learns to trust, I encouraged her to persevere with him. It wasn't too much later that I received a lovely card with photos of Spike relaxing on the car bonnet and on the window sill. Eleven weeks after his adoption Spike is now snuggling up beside Kathy when she watches TV, sleeping on her bed with her at nights and purring & dribbling in his pleasure when he is being stroked. He has befriended some of the neighbouring cats and enjoys climbing the fences and keeping watch down the street from his favourite position on the swing seat.

With a laugh, she adamantly informs me that I can't have him back. I knew, given time, that he would etch a place in her heart too...lucky Kathy, lucky Spike.

ORIGINAL ADVERT: SPIKE WOULD PREFER A QUIET LIFE AS AN ONLY CHILD I was contacted by a vet clinic when affectionate 4-year-old Spike was surrendered to be put to death with a huge abscess on his forehead (See photo taken after his surgery).

His caregivers were relieved to know that Animal Re-homing would take him under our wing, raise funds to pay for his surgery and treatment costs, provide rehabilitative accommodation and find him the calm lifestyle he craves. Spike's former home was stressful to him - noisy and busy with three young children, a dog and, although he is a big cat, his mother constantly beating him up.

Spike was not allowed in the bedrooms and was put outdoors at night. His new caregivers will need to allow him more leeway and to lock him safely indoors at night, so that he is at less risk of traffic injury, dog attacks and cat fights. From the moment we settled handsome Spike into a warm and quiet bedroom, his pleasure was obvious. He began to relax into a bundle of happy purrs, to gain weight and confidence and to welcome our attention. His nervousness has diminished, he comes to greet us and is quite a chatty fellow as he wanders through the house. Spike is now neutered, micro-chipped, double vaccinated, double wormed and flea treated. His teeth are fine and the fur has beautifully grown back over his surgery site.

Although initially shy, Spike is a sweet and lovely natured cat who will make a great companion in a quiet, one or two person household with no other animals or young children to harass him. Having said that, he would probably live compatibly with an easy going, cat-friendly dog.

Once he trusts you, he is a very smoochy boy to whom we have become particularly attached. If you are able to offer Spike a gentle home in an area that is safe from traffic, I very much look forward to hearing from you. Thank you.