I was so happy when Kath and Bill came forward to offer Cinnamon a safe haven on their 15-acre property. They had previously adopted 13 rescued boys from me who are absolutely adored as any other pet in their care. It was so heart-warming to watch Bill busily adding climbing frames to the trees on their property so that the birds could reach higher levels. And when, following vet care and loving indoor palliative attention, one their boys passed away from old age I grieved their loss with them. 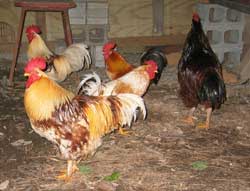 Cinnamon was introduced to the existing flock through a meshed enclosure, so that when he was released several days later, he was accepted by his colourful buddies.

The words below are only a small part of the gratifying updates they have sent me regarding Cinnamon (now named Sandy) and any other animal they have adopted through me. The photographs show him integrated with some of his new companions.

"We just wanted to tell you of the wonderful result of Cinnamon's adoption. We kept him in for a week, but there was only a little fighting the first night - that's all. The rest of the time, several of the others were vying to be the one standing next to him on the other side of the mesh.

We tentatively let him out the other day, with the mesh door ready to close again if he had to run back in. No fear! As soon as he was out, the two others whose space he had "invaded" by being put in the carport, immediately adopted him and started showing him around their area and the lawn. 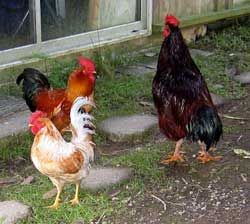 As soon as the others knew he was out, several of them were vying to be the one privileged to stand next to him. One of the roosters, Stan, then took him all over our property showing him all the places to go and things to do, and where the boundaries are. Sandy's mates - about four of them, made sure they positioned themselves surrounding him when the head charge, Rover, came around, but Rover has shown no aggression at all, and has accepted him very nonchalantly.

I just wanted you to know that it has worked out BETTER than we could have hoped. He seems to be integrating some of the other groups here, and territory that had been claimed by a couple, is now open because Sandy and his mates are welcomed there.