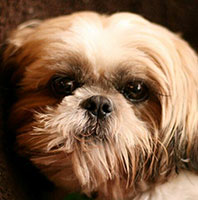 Oscar is moving into the home of one of his favourite family members where he will be able to enjoy the company of her two resident dogs. He loved going to doggy daycare, so now he will permanently have canine company - and Tracey will still have contact with him.

When 9-year-old Oscar’s primary caregiver changed jobs, the stable life he had enjoyed from an 8 week old puppy - ended.

Suddenly he was unable to go to work with her every day, suddenly her hours away from him were longer, suddenly he was anxious as she took overseas trips and suddenly he found himself at doggy day-care five days a week. Tracey believes Oscar deserves more then she is now able to offer him.

This dear little purebred Shit Tzu with his cute Ewok face, weighs 10kg, is neutered, stands at about calf height and keeps very good health. He loves company, chasing his toy and going out for short walks at parks and beaches. His coat is kept short with a professional groom every 10 weeks, his ears and tail are brushed weekly and his eyes are cleaned with vet-purchased wipes every few days.

Oscar will stress if he is left alone, so anyone contemplating his adoption will need to have a plan in place so that he always has company. He currently enjoys going to doggy day-care with fifteen other canines, so that could be an option for applicants who are unable to take him to work with them. He is not so welcoming of other dogs when he is on a leash…and he will chase cats…

Although he knows some household commands, Oscar has had no professional training and we strongly recommend group dog obedience classes for him. This will tighten his recall and other basic commands and speed the bonding process with his new caregiver(s). He likes treats, which will assist in his training.

Oscar will sometimes toilet indoors if he is stressed, so we are seeking people who will recognise that re-homing is a huge upheaval in a dog who already sufferers separation anxiety. Oscar must continue to sleep in his new caregiver’s bedroom at night.

He will initially challenge men at the door and will chase lawnmower men. He is frightened of loud noises and fireworks, but loves the blow-dryer on his body after a bath. Oscar has been around children and doesn’t mind them petting him, but we would prefer a middle-aged adult home for him because he doesn’t form strong bonds with children. The elderly may find him too hard to manage on a lead when other dogs pass by.

Oscar is very affectionate and trusting. He will roll on to his back for a tummy rub, loves ear scratches and cuddles on the couch or on Tracey’s bed in the early morning. He loves attention but is equally happy to sit or sleep in his bed rather than being on a lap. If anyone is sick or upset, he will sit with them as a comforter.

When asked what an ideal home would be, Tracey responded, “Probably a mature couple or person. Older children are fine too. Someone who can take him to work or who works from home. Maybe with another chilled-out dog so if he has to be left occasionally (i.e. to go out for dinner) he doesn’t have to be dropped to a babysitter. Someone who will love his loyalty and affection and understand his separation anxiety. He just wants love and security and he will pay you back in spades with his awesome personality. Definitely someone who loves and has owned dogs before. It is incredibly important to me that we only do this to him once. I know he would struggle if he went to a home that decided he wasn’t right for them and wanted to return him or pass him to another family”.

If you have dog-proof fences & gates and are prepared to work your way through Oscar’s idiosyncrasies with patience and love, I look forward to your inquiries and applications.