This beautiful dog has been adopted into an ideal family situation. Jarvis is living with Sherill and Paul and their two young daughters. He has been working one-on-one with dog coach, Colleen, and has started at his group training sessions. I especially wanted a home for him where there would be a strong commitment to professional training and where he would be able to have playful interaction with children. I was delighted when this family came forward and it was love at first sight when they met up with him. Finally, the day of his adoption came and the children were waiting for me on the kerbside when I arrived. The excited anticipation of their parents was also palpable – he was wanted, so loved already. Afterwards, as I drove away from their home, I admit to shedding tears of joy that this very affectionate boy was finally at home. Thank you to all of the hopeful people out there who applied for Jarvis and also to The Dog Protection Society for looking after him so splendidly when I ran out of fosterers. The updates below give some idea of the new life Jarvis is living…

“I thought you might be interested in hearing about our first night with Jarvis. Not long after you left, Haylee gave him his Christmas cracker which he promptly carried up the garden steps and buried in the top garden! We all laughed as he used his big head like a shovel. It didn't take long for him to show us his playful side as he tossed his teddy around on the deck and bounced after it as though he was a rabbit. He waited outside while we all had dinner and then ate his in record timing (he

does seem to like food). We all took him for a fabulous long walk where he met our neighbours and our friends down the street. He also met with some dogs off their leads which he coped with very well. We were surprised that he showed no interest at all when another dog barked excitedly at him from behind a wire fence. He was very well behaved and even waited several times of his own accord when Haylee was lagging behind. When we returned, we all sat on the deck with a cold drink and Jarvis came and lay down with us. After the girls had gone to bed, he came and lay down on his bed. He seems to have made a real connection with Paul and barely leaves his side. Paul moved Jarvis’s bed from the lounge into our room for the night and after a big sloppy goodnight kiss, he curled up in his bed. He is a gorgeous gentle boy and very affectionate. Many times he has rolled over at the kids feet for a tummy rub. A big softie and a perfect fit for our family!”

“These early days with Jarvis have been going really well. He is soooooo affectionate and just loves to be wherever we are. We have been walking him twice a day and he is very well behaved on the lead. He is learning that the kitchen is not a place for him and is quite good at waiting at the doorway now. He is also learning that our bed is ours (not his). He sleeps in our room, but stays in his own bed until morning when he hops up for a good morning cuddle! The kids are loving spending time with him and have even taken some responsibility for his care. Haylee has made a "poo chart" and at the end of the week each child gets 20c for every poo they pick up. So far I have not had to pick up any! We have discovered that he does have a voice. He will bark if there is someone outside - especially if he cannot see them - but not to the point of being a nuisance. He has also discovered the joy of his dog house that Paul built for him. On his walk tonight he met Milo, a 5-month-old girl dog who belongs to some friends of ours down the road. We are looking forward to play dates at the park once Jarvis has had some training and can be allowed off his lead. We will send another update soon”.

The note below came from the previous caregiver of Jarvis who was thrilled to hear of the home I had approved for him: “That is such wonderful news. I knew when you emailed me last week that they would be the ones that would give Jarvis the home he deserves. I have had to come back to writing this e-mail as I can't stop crying! I feel overwhelmed with many emotions, including feeling great that he has such a loving home, but also feeling incredibly sad that we could not provide the right environment for him. Thank you once again for all of your hard work with Jarvis. I look forward to hearing how he is going and would love to be able to visit him one day in the future”.

NOTE: Animal Re-homing discourages previous caregivers from visiting re-homed dogs for at least a nine month period. This helps to minimise the confusion and possible behavioural issues a dog may experience when trying to settle into a new ‘pack’. After nine months, the decision to meet up or not lays with the new caregiver.

The mother of this gorgeous 16-month-old boy is a purebred British Bulldog. His father is thought to be a purebred American Staffordshire Terrier. Jarvis has lived with his current family since he was 10-weeks-old, but now needs to be re-homed. He is no longer getting the company, exercise or training that he needs and, due to a house move, he cannot live at the new rental property. Although he is loved, Jarvis is lonely and under stimulated...sadly his lifestyle cannot be improved. Weighing 25kg and being a strong, muscular boy, he would not be suitable for toddlers, frail or elderly people - because he may knock them over in his playfulness. However, a family with school-aged children would be a lovely bonus for him as his whole demeanour brightens and his tail wags furiously when children approach him.

Jarvis loves to be taken for walks, and being an energetic breed, this would need to be at least once a day. Lots of suburban exercise or a rural family would suit him well.

He thoroughly enjoys playful interaction with other dogs, so Jarvis would be fine having a canine playmate of opposite gender for company if his new caregivers work full time.

This friendly, soppy fellow would benefit from some professional training or to be adopted by dog folk who use gentle, consistent techniques. His love of food would be a great help in this regard.

Up until now, Jarvis hasn’t been allowed in the house although he would love to share in the indoor home life of his new caregivers. At every opportunity he joins his current family in the office garage so that he may be rewarded with cuddles and affection. To quote his caregiver, "He needs to go to someone who will love him and care for him and who will keep him safe".

Jarvis is neutered, registered, micro-chipped and up to date with his vaccinations, flea and worm treatments. His teeth are in great condition.

If you have a fully and securely fenced & gated property and will put in the time and love to give Jarvis some basic or professional training, I look forward to hearing from you. 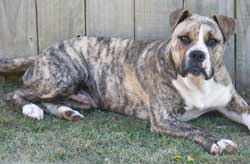 He will suit a mature single person, a couple or a family with older children to give him the attention he craves. Jarvis is currently in Auckland and homes for him will be considered as far north as Wellsford and as far south as Hamilton. Applicants will need to travel to Auckland to meet Jarvis and expect to have a site visit made to their property. Adoption criteria applies.

I look forward to a particularly happy ending for this handsome boy! Thank you.